Tag Archives: Mystery of the Cathedrals

“And the flame truly sprang upwards at the place and time prescribed, energy did indeed burst forth from what, to ordinary perception, was inert, non-inflammable matter. Man at that moment found himself endowed not merely with his existing strength but with a method which would enable him to master all the forces surrounding him. For one thing he had acquired absolute and final confidence in the instrument of mathematical analysis which for the past century he had been forging. Not only could matter be expressed in terms of mathematics, it could be subjugated by mathematics.

Perhaps even more important, he had discovered, in the unconsidered unanimity of the act which circumstances had forced upon him, another secret pointing the way to his omnipotence. For the first time m history, through the non-fortuitous conjunction of a world crisis and an unprecedented advance in means of communication, a planned scientific experiment employing units of a hundred or a thousand men had been successfully completed. And very swiftly. In three years a technical achievement had been realized which might not have been accomplished in a century of isolated efforts. Thus greatest of Man’s scientific triumphs happens also to be the one in which the largest number of brains were enabled to join together in a single organism, the most complex and the most centrated, for the purpose of research. Was this simply coincidence? Did it not rather show that in this as in other fields nothing in the universe can resist the converging energies of a sufficient number of minds sufficiently grouped and organized?

Thus considered, the fact of the release of nuclear energy, overwhelming and intoxicating though it was, began to seem less tremendous. Was it not simply the first act, even a mere prelude, in a series of fantastic events which, having afforded us access to the heart of the atom, would lead us on to overthrow, one by one, the many other strongholds which science is already besieging? The vitalization of matter by the creation of super-molecules. The re-modeling of the human organism by means of hormones. Control of heredity and sex by the manipulation of genes and chromosomes. The readjustment and internal liberation of our souls by direct action upon springs gradually brought to light by psycho-analysis. The arousing and harnessing of the unfathomable intellectual and effective powers still latent in the human mass. . . . Is not every kind of effect produced by a suitable arrangement of matter? And have we not reason to hope that in the end we shall be able to arrange every kind of matter, following the results we have obtained in the nuclear field?”

– From Some Reflections on the Spiritual Repercussions of the Atom Bomb, Pierre Teilhard De Chardin

Having been well cured in the after glow of the first nuclear tests at Trinity, it’s rare today to find those who fully appreciate the weight of those discoveries. In Teilhard De Chardin’s analysis, written in 1946 shortly after the terrible events at Hiroshima and Nagasaki, humanity has discovered a sure sign of it’s unlimited potential. Rather than an end point, he sees the atomic bomb as just the beginning of a new stage of evolution in which Humanity is crowned with the glory of knowledge and comes full face with the roots of existence.

We know today that this discovery is not so easily contained, each of the categories that he discusses are attended by an endless stream of ethical questions that seem insurmountable within the present state of society. Genetics is in the hands of corporations, pharmaceutical companies and a limping Academy, the issues that surround disposal of nuclear waste have stopped development of any far reaching use of nuclear power, and the reactors that have been built are currently decaying under a lapsed economy that cannot support heavy infrastructure maintenance.

We also face an aging population of scientists who have the skills and knowledge that have maintained these reactors up to this point. The physicists, metalurgists and chemists who designed, built and maintained these sites are getting older, or have already passed on, and due to the focus of the Academy on providing ‘thought leaders’ and technicians who are ready to ‘face the future,’ we have left behind much of the knowledge necessary to keep up with what we have.

Some foresaw the tragic potential in this exploration of the inner sanctum of Nature. Writing in the 1930’s the anonymous Adept Fulcanelli discusses a less democratically optimistic view of these advances:

“God the Father holds in his hand this globe, surmounted by the fiery sign. The four great ages— historical representations of the four ages of the world—have their sovereigns shown holding this same attribute. They are Alexander, Augustus, Charlemagne and Louis XIV.3 It is this which explains the inscription INRI, exoterically translated as lesus Nazarenus Rex ludeorum (Jesus of Nazaredi, King of the Jews), but which gives to the cross its secret meaning: Igne Nalura Renovatur Integra (By fire nature is renewed whole). For it is by fire and in fire that our hemisphere will soon be tried. And just as, by means of fire, gold is separated from impure metals, so, Scripture says, the good will be separated from the wicked on the great Day of Judgment.

The first three are emperors, the fourth is only a king, the Sun King, thus indicating the decline of the star and its last radiation. This is dusk, the forerunner of the long cyclic night, full of horror and terror, ‘the abomination of desolation.”

– Mystery of the Cathedrals, Fulcanelli

In alchemical terms this discovery was not the achievement of the Great Work, but the discovery of just one more False Light held up as a distraction and trap. Rather than find the Secret Fire which is attendant to the perfection of the Philosopher’s Stone, they merely encapsulated and unleashed the deadly potential of the Central Fire, whose positive symbolic form is the Fire of Life and thus in polarity the Fire of Death. Following the Traditional philosophy of Cyclical movement, Fulcanelli foresaw this exemplary act of hubris in the form of technological advances that outpace the moral,  intellectual and spiritual advances necessary to maintain them.

“In Hindu mythology, the four equal sectors of the circle, formed by the cross, were the basis of a rather strange mystical conception. The entire cycle of human evolution is figured there in the form of a cow, symbolizing Virtue, each of whose four feet rests on one of the sectors representing the four ages of the world. In the first age, corresponding to the Greek age of gold and called the Creda Yuga or age of innocence, Virtue is firmly established on earth: the cow stands squarely on four legs. In the Treda Yuga or second age, corresponding to the age of silver, it is weakened and stands only on three legs. During the Touvabara Yuga, or third age, which is the age of bronze, it is reduced to two legs.

Finally, in the age of iron, our own age, the cyclic cow or human virtue
reaches the utmost degree of feebleness and senility: it is scarcely able to stand, balancing on only one leg. It is the fourth and last age, the Kali Yuga, the age of misery, misfortune and decrepitude. 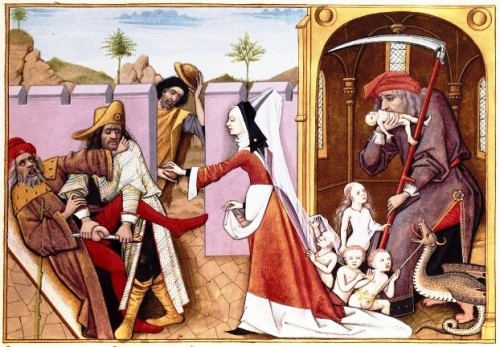 The age of iron has no other seal than that of Death. Its hieroglyph is the skeleton, bearing the attributes of Saturn: the empty hourglass, symbol of time run out, and the scythe, reproduced in the figure seven, which is the number of transformation, of destruction, of annihilation. The Gospel of this fatal age is the one written under the inspiration of St. Matthew. Matthaeus, Greek  Ματθαῖος, comes from Ματταθίας, which means science. This word has given μελέτη, μνημονικός,  study, knowledge, from μάθετε, to learn. It is the Gospel according to Science, the last of all but for us the first, because it teaches us that, save for a small number of the elite, we must all perish. For this reason the angel was made the attribute of St. Matthew, because science, which alone is capable of penetrating die mystery of things, of beings and their destiny, can give man wings to raise him to knowledge of the highest truths and finally to God.”

– Mysteries of the Cathedrals, Fulcanelli

There is a Loretta Lynn song titled “Everyone wants to go to Heaven, but nobody wants to die,” that speaks very plainly to the issue at hand. Every one wants the advances of technology, but too many lack the humility, the ego transformed in death, to truly benefit. Worse, those who are actively pursuing development in these areas have proven time and again that their quest is based on idle curiosity, vainglory or envy.

“I spoke of the Spirit of the Earth. What are we to understand by that ambiguous phrase?

Is it the Promethean or Faustian spirit: the spirit of autonomy and solitude; Man with his own strength and for his own sake opposing a blind and hostile Universe; the rise of consciousness concluding in an act of possession?

Is it the Christian spirit, on the contrary: the spirit of service and of giving; Man struggling like Jacob to conquer and attain a supreme center of consciousness which calls to him; the evolution of the earth ending in an act of union?

Spirit of force or spirit of love? Where shall we place true heroism, where look for true greatness, where recognize objective truth?

It would take too long, and it is outside the scope of this paper, to discuss the comparative worth of two opposed forms of adoration, the first of which may well have attracted poets, but only the second of which, I think, presents itself to the reflective mind as capable of conferring upon a universe in motion its full spiritual coherence, its total substance beyond death, and finally its whole message for our hearts.(Witnesses of that experiment in Arizona found, in the anguish of the last instants, that in the depths of their hearts they were praying. [Official Report: appendices.])

What does matter here is to note that Mankind cannot go much further along the road upon which it has embarked through its latest conquests without having to settle (or be divided intellectually on) the question of which summit it must seek to attain.

In short, the final effect of the light cast by the atomic fire into the spiritual depths of the earth is to illumine within them the over-riding question of the ultimate end of Evolution — that is to say, the problem of God.”

– From Some Reflections on the Spiritual Repercussions of the Atom Bomb, Pierre Teilhard De Chardin

Both Teilhard De Chardin and Fulcanelli saw the end point of these advances to be a meeting with the Divine, with the end point of Being. What Fulcanelli has pointed out with more honesty is that such a meeting is always attended by a trial, and that the quest for Illumination requires a sacrifice. Despite the title of his Reflections leading one to think that they explore the Spiritual repercussions of the atomic bomb, Teilhard De Chardin’s analysis remains firmly rooted in the physical sphere, blind to the full implication of Igne Nalura Renovatur Integra (By fire nature is renewed whole,) and lacking the realization that Actaeon, upon his vision of Diana, was devoured by his own dogs.

As Ira and Charlie Louvin sing so sweetly:

“Do you fear this man’s invention that they call atomic power. Are we all in great confusion, do we know the time or hour, when a terrible explosion may rain down upon our land, leaving horrible destruction
blotting out the works of man?

Note: This post is dedicated to Zac Odinn who has been instrumental in introducing me to the many mysteries of Almagordo.